Ok, so other than the updates themselves, which are awesome, consider how this changes what your students can do!

What can students do with this?

Faster video recordings sent to you in Google Classroom
Third Party Workaround (Sorry Flipgrid, Threadit, and Screencastify)
Instant access to annotated screenshots to share with your class on Meet, Zoom, or in Classroom.

Who gets this update?

It’s an Android 11 update, so check out the list of chromebooks receiving it here and see if yours or your student chromebooks are on the list!

It is what it is.

I’ve heard that phrase more times than I can count, but I should have started counting back when I heard it for the first time, because I’m sure the number of times would have been staggering (at least I think I’m sure). Many teachers just don’t like the way school, teaching and learning are going right now. Some teachers love it, but for a lot of us, the stress of what is really a totally new job and a totally new teacher identity in a location where our profession crosses over with our home and personal lives so that we forget whether we’re supposed to be preparing a lesson or preparing a snack is leading to the inevitable…teacher burnout.

If you’re anywhere near this precipice…have a listen to the newest episode of The Instant Relevance Podcast. My guest, Amber Harper (@burnedinteacher), is the author of Hacking Teacher Burnout and the founder of The Burned-In Teacher. Her perspective and practical approach to solving the burnout problem and using that fire to re-ignite your passion for teaching will inspire you and prepare you for tomorrow. 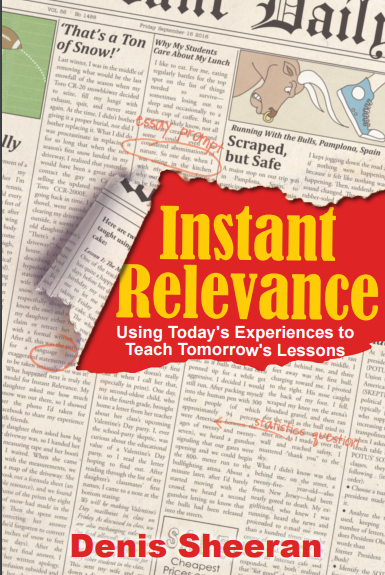 Hide Slides Chrome Extension According to the same valid statistical survey I recently made up, everybody loves Google Slides…everybody. Being web based, it’s easy to add videos, images, items from your google drive, find templates, and take Google’s own suggestions for display themes through their Explore function. But sometimes, as …

Fidget Spinners Post = Tons of Great Ideas! If you haven’t read my most recent #MakeItReal Moment about Fidget Spinners, either look farther down the webpage or check it out here. To make a long story short, I’m against banning what kids love to do and all for finding creative …

Announcing The New #MakeItReal Chat A Chat About Increasing Relevance Of Content For Our Students Every Wednesday, 9:30 pm for 30 Minutes I had the fantastic opportunity to host the popular Teach Like A Pirate chat (#TLAP transcript) last night to discuss the components and ideas in my new book …

A little while ago I sent out a survey to teachers asking them to share stories of how their lives and the lives of their students were affected by time spent together outside the classroom. As the 2015-16 school year comes to a close, I’d like to share those stories, …

Ever wonder if you’re the only one who sees things differently? After years of teaching math and looking for real world applications to help my students connect the math to life, I’ve realized that this is entirely backwards. We should be looking for the math in the real world around …

When I was teaching high school I developed a course called Senior Math Topics. It was a fourth year of math for future non-math majors. We incorporated history of math, classical problems, the math behind music, art, architecture, encryption, voting and machines. In particular, I had students build a Rube …