For Those About To Rock…

I’m excited to have Laura share her experience of running with an idea, taking it to new levels, and truly modeling the #MakeItReal message. Read her post below and share your comments with us here and on twitter with the #MakeItReal hashtag. And in case you’re looking for more from Laura, her blog can be appropriately found here: Rocking The Boat 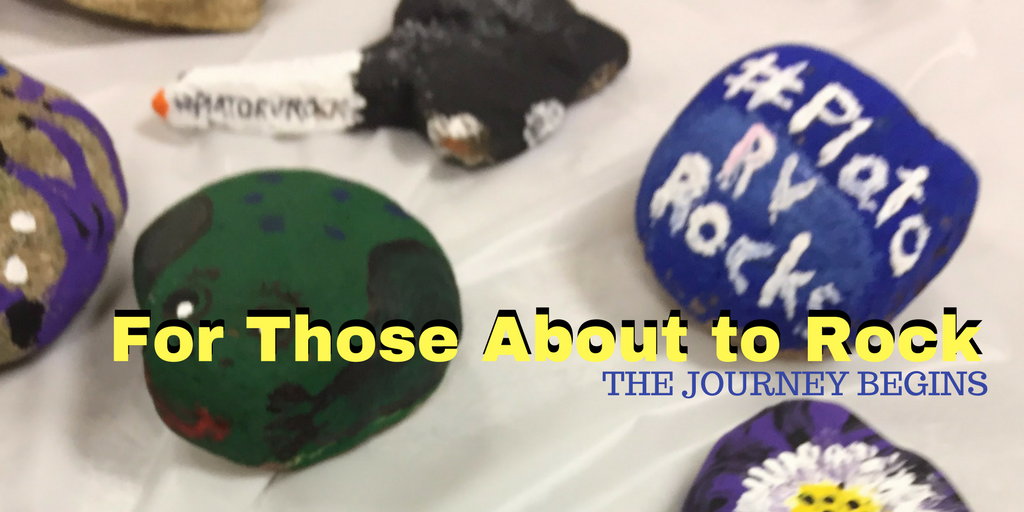 What began as a small pebble of an idea I had after reading Your School Rocks by Denis Sheeran has gathered momentum. As often happens with my ideas, they tend to have a rock slide effect on other people. One idea sparks another then another, and since I prefer to leave no stone unturned, soon my colleagues were buried under a pile of pebbles, rocks, and boulders.  So if you are planning to take the slide with me and Rock This School Year, then grab a hard hat or a helmet. Here we go. 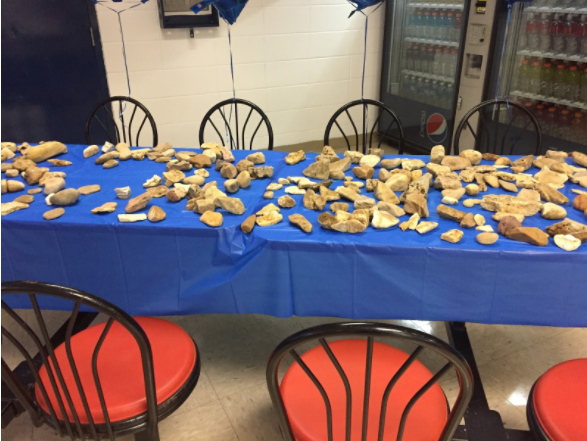 Stand Up And Be Counted

To get the trickle of rocks started down the mountain, I emailed my superintendent and the high school and elementary principals.Then I briefly explained what Denis outlined in his blog, included his link, and explained that as communications director for the district, I proposed that our district implement the Your School Rocks project as a low tech way to get a positive message or positive association for our district out to the community and beyond.  It was a risk, but I knew it would be a good thing for our district, and luckily, my superintendent loved the idea. I got no quarry from her. (Sorry, I can’t help the puns. They just keep rolling.) 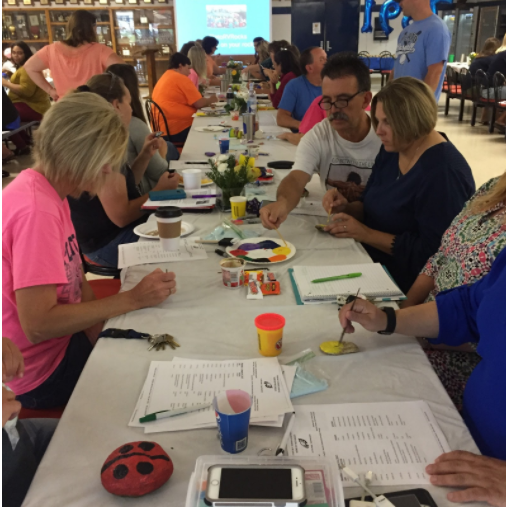 For What You Are About To Receive

My original thought was to have students paint a few rocks, and then we could spread them out across the district. My superintendent, however, had an even boulder idea. So, we recruited the high school art teacher, gathered 160 rocks from river beds (different shapes, but river rocks are smooth and easy to paint), bought some basic paint supplies, Sharpies, and we were in business. 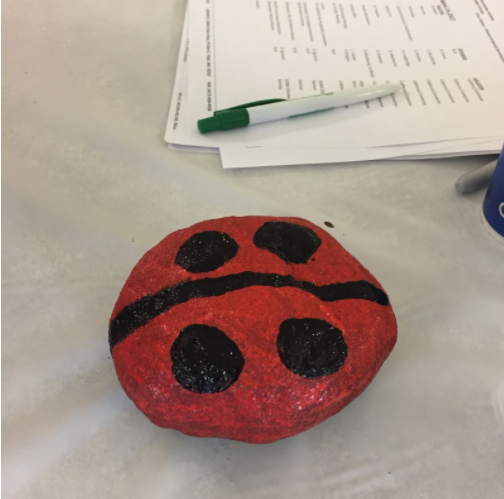 We Are The Dealers

When our teachers, cooks, and custodians arrived for the big Back To School district staff meeting, we had two areas set up with the rocks, tables were covered and staged with flowers, paper plates with sections of paint, brushes, sponges, cups of water, and everyone was directed toward the rock stations and told to get rolling as soon as they finished eating the complimentary breakfast that the cooks provided. We had a rock-themed playlist ready, but still my stomach did nervous flips and flops as everyone trickled into the cafeteria.  The Debbie Downers and Negative Nancys might stone me for this, feeling like they had hit rock bottom, but I knew it was a great idea, so I nudged more stones and sent them bumping down the slope. Here we go. 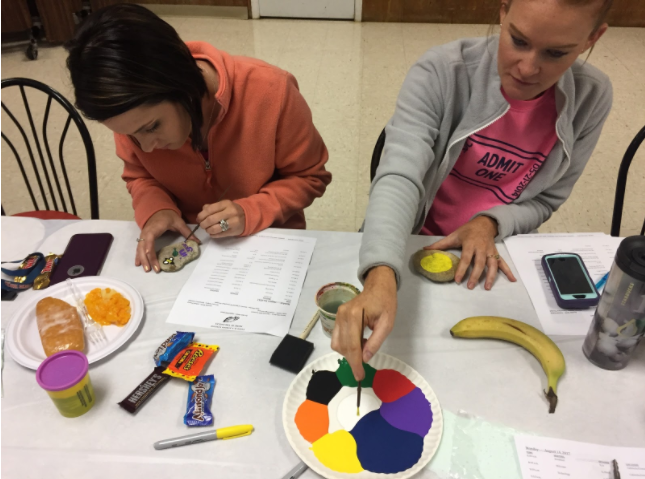 We’ll Give You Everything You Need

Once the meeting officially started, the superintendent thanked those who already had begun painting, then turned the mic over to me. I again explained that the idea originated with Denis, and since back to school shopping expenses along with the usual complaints about school would be ramping up negative sentiment, I had an idea of how to get a fun positive message out to our district patrons. We’re painting rocks. I paused briefly expecting my project to be off to a rocky start and I was a bit petrified at the thought, but I noticed several of the faculty and staff were already painting and listening. I explained that painting rocks is a low tech way to make people smile, and when they see the school hashtag for this project, #platorvrocks, then maybe that smile will begin to associate with the school even when people aren’t holding rocks. I explained that our theme for the year was to make the positives so loud that the negatives couldn’t be heard (thanks, George Couros). I asked the staff to paint at least one rock during the morning session, and to use a Sharpie or paint the hashtag on the back side or somewhere on the rock. I instructed them to leave their rocks on the table or take them and spread them throughout the district. And so it began. 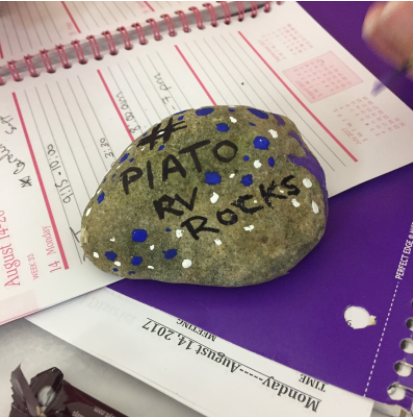 Hail Hail to the Good Times

We do plan to include students in the painting of rocks, and I spoke with our teachers about that as well, but the first day back for teachers is a rolling stone that gathers no moss . There wasn’t much time to think about it, and then our Back to School Bash / Open House was upon us. The two hours of the night flew by, and I found myself chatting with one senior boy who’s normally pretty quiet. He’s artistic and athletic, and he picked up the painted rock I had on display in my room.  Like other students and parents before him that night, he asked me about it, and I like I had done several times before, I explained my plan for our rocks.  He listened, nodded thoughtfully as he held the rock that was painted in school colors with flowers and the hashtag featured prominently. I could see his wheels turning. “Like geocaching?” he asked?  A few more pebbles dislodged and a tumble of ideas began. It could be like geocaching. What if it became a type of contest with a featured rock of the month? So I pitched it to him to gage his reaction, to see if he would cast the first stone. I like to consider my high school students as my Lame-o meters.  I have ideas, and then they declare them lame or not. He declared it not Lame-o. 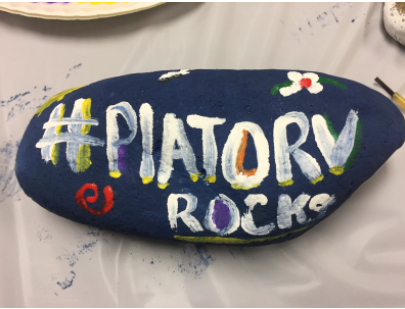 ‘Cause Rock Has Got the Right of Way

So now that we’ve painted rocks and will be placing them all over the district, here’s where I’m taking our project next. We will select 4 featured rocks a month, hopefully starting in September.  There will be an elementary rock, middle school rock, high school rock, and a community rock. The four rocks will be hidden somewhere inside our district, which is fairly large. To help in the search for the rocks, a clue or riddle will be provided on the Wanted Posters along with the picture of each rock. The clue will help narrow down the search to aid those looking for the rocks. This portion of our project is still under development, but we would like to incorporate some history of our town and area into the clues, and the prizes we are considering for being the first to find the target rock are low cost ones. For the community, we can offer free passes to individual ballgames or events, season passes, a tea party with the kindergartners, and other low cost ideas. We are considering offering fun things like Hat Day passes, where the recipient can wear his or her hat all day at school, or Get My Cell Phone Out of Jail Free cards, to rescue a confiscated cell phone (students can have them at school, but they cannot be using them without the teacher’s consent and then only for educational purposes). My plan is to have a Google form set up where students can suggest prizes they would like to win. After all, they know best what they would want to win after searching for the target rock.  Now we may just start with one rock, but if we have four separate target rocks, we can hang up more Wanted Posters, which will have a positive school message.  Also, the prize offered for being the first to find it can be tailored to suit the age group of the winners. 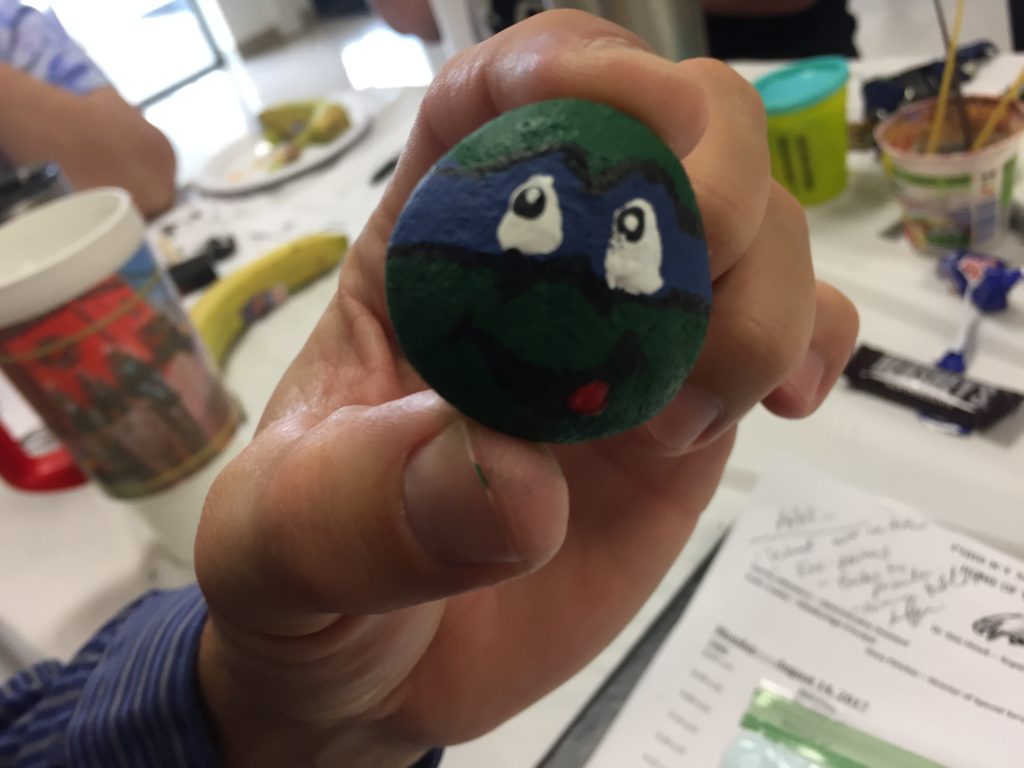 We Ain’t No Legend, Ain’t No ‘Cause

We are at the very beginning of our Rock The School Year journey, and we may make mistakes, but we are willing to keep putting one foot in front of the other to reach our destination of making the positives so loud that the negatives can’t be heard, like the roar of rocks tumbling down the mountain.  We haven’t worked out all of the kinks, and this post is the first step to get the word out in a larger way than what we have already done in the Back to School meeting.  I shared the project with some of my classes on the second day of school, and they seemed interested. I polled the sophomores in my English classes to see if their Lame-O meter was the same as the senior’s, and it was. Surprisingly, they didn’t think it was lame either. While telling this to my partner in the Rock the School Year project, the art teacher, she had another idea.  After listening to her, my ideas began to tremor and quake even louder and stronger than before, and now the rock slide has begun. 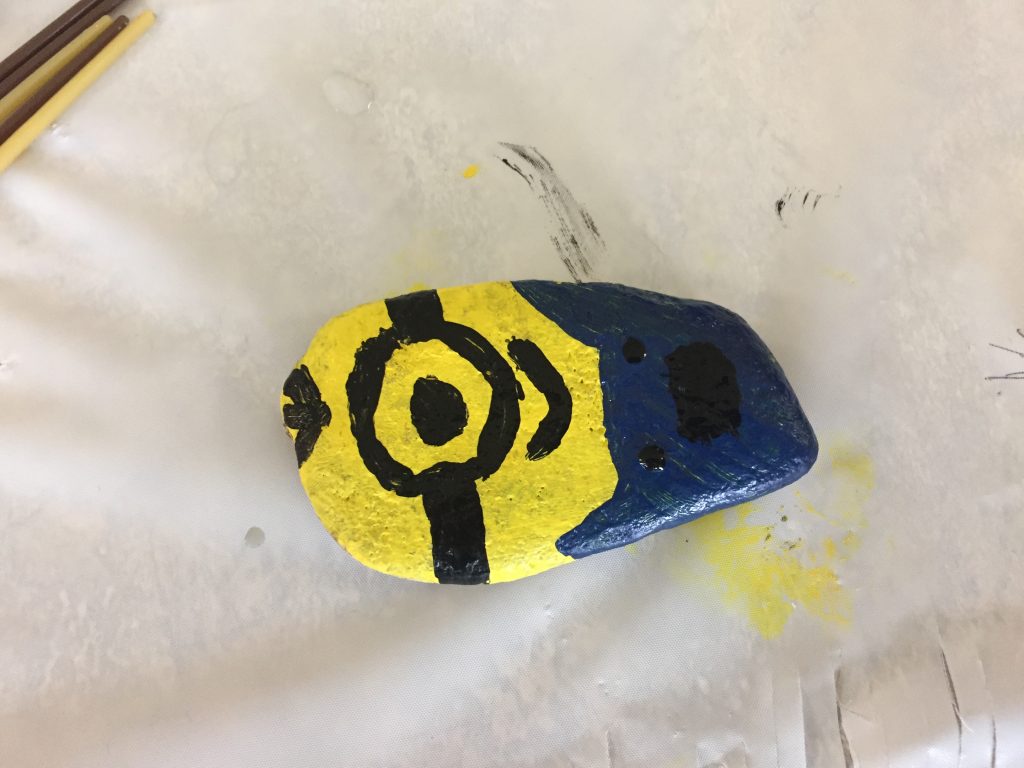 Yvonne (Mrs. Reck to the students) explained her idea of sending a painted rock to various alumni and having them take pictures with the rock from the various locations where they now live and work. Rockin’ Flat Stanley to a whole new level, so to speak. As we discussed the feasibility of this, we also kicked around the idea of having them paint their own #platorvrocks, which would eliminate the need to mail anything. Also, our district is near an active military fort. We have a lot of community members who serve in the military, as well as several alumni who currently serve. What if we sent a painted rock to them with a care package and letters?  And as we tossed this idea around after school that first day with students, I had my new idea. 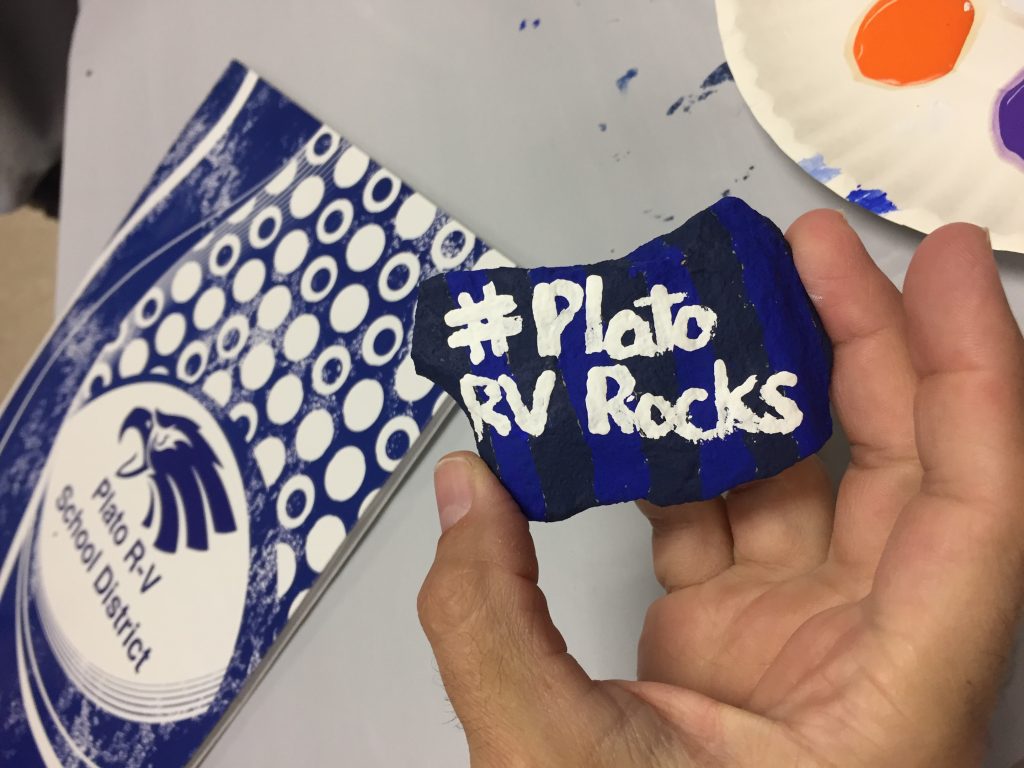 For Those About to Rock, We Salute You

Here’s where I need volunteers. Yes, I’m talking to you, the reader, from wherever you may be at this moment. What if we partner with each other in a committed effort to Rock the School Year, and in that effort, we do a painted rock exchange. I want to start a rock garden that features rocks from school districts all over who have joined in this rock exchange. It should be in a noticeable location on school property, where visitors in the area can enjoy the simple beauty of painted rocks. Maybe I can put a sign nearby that explains how we are all better together, that the garden represents education, educators, and students everywhere, not just those in the current population center of the United States. Yes, that’s us. A small rural town in the population center of the US, or at least we are until the next census. Just a stone’s throw away from several bigger towns. We may be small and we may be rural, but our students often come from all over. We are outside of Fort Leonard Wood, so we are used to having well traveled students from military families counted as part of our student body. While that in no makes us a diverse school, it does mean that we get a steady diet of new ideas and new people, which can be a good thing for a small town, so a #BetterTogether rock garden may be just the thing.  If it helps get more educators off of their islands to connect with the rest of us, and spreads positive feelings about our district, then we have managed to kill two birds with one stone. Look out. We Will Rock You. 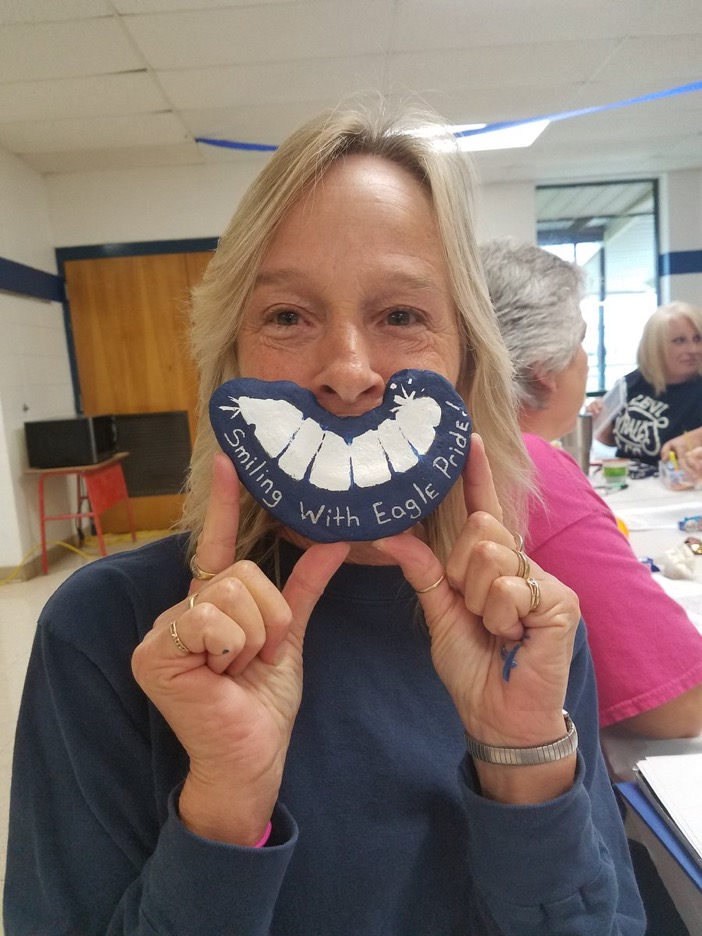