It’s May, which means that school districts across the country are seeing a shift in their staff. Some teachers are retiring or resigning, some new positions are being created and filled, and in unfortunate situations, other positions are being eliminated.  As a Supervisor of Mathematics for a high school and its two feeder middle schools, I have the privilege and opportunity to interview many candidates for these open positions.  If you’re interested in what I’ve found to be a great set of questions for teacher interviews, read this post from Connected Principals.

After the slew of regular questions about background and experiences, I like to shift the interview. My last question of the interview begins with a story and ends with the question. I’d like to tell you that story now, then ask you the same question.

It was the summer of 2001.  I was 25, had just broken up with my girlfriend “for good” and the last of my friends to graduate from college had just walked for his degree. Before he started work, he and I and another friend had decided to take a trip to Europe together before jobs and lives got in our way for good.  We were part of an orchestra that was going to tour England and Scotland for 3 weeks, so we added on 3 more weeks to the end of the trip. Our plan included Paris, Spain, Italy, Austria, Germany and then a flight home. 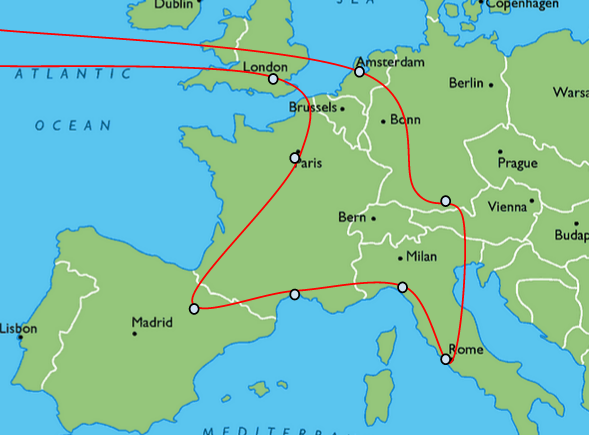 A major part of the trip was a planned visit to Pamplona, Spain, for the first day of the San Fermin Festival, otherwise known as the Running of the Bulls. When we got to Pamplona the night before the festival started, our hotel had been triple booked, and we showed up third, so we spent the night in our rental car, which thankfully had been upgraded to a minivan. That’s right, I drove around Europe in a minivan, and I’d do it again. As we didn’t have a hotel to crash in, we obtained some scalped tickets to the Bullfight that evening and saw a great cultural event. 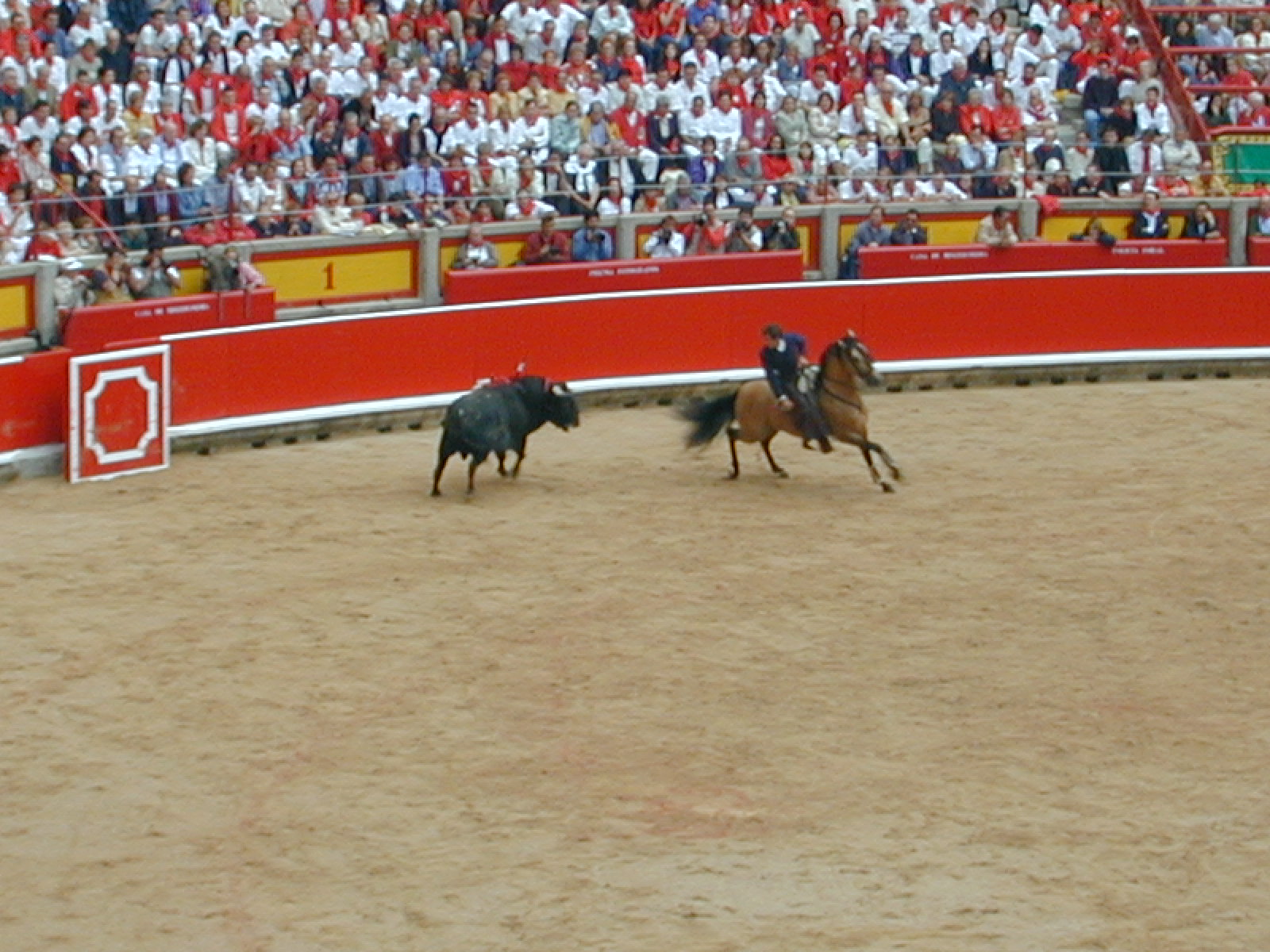 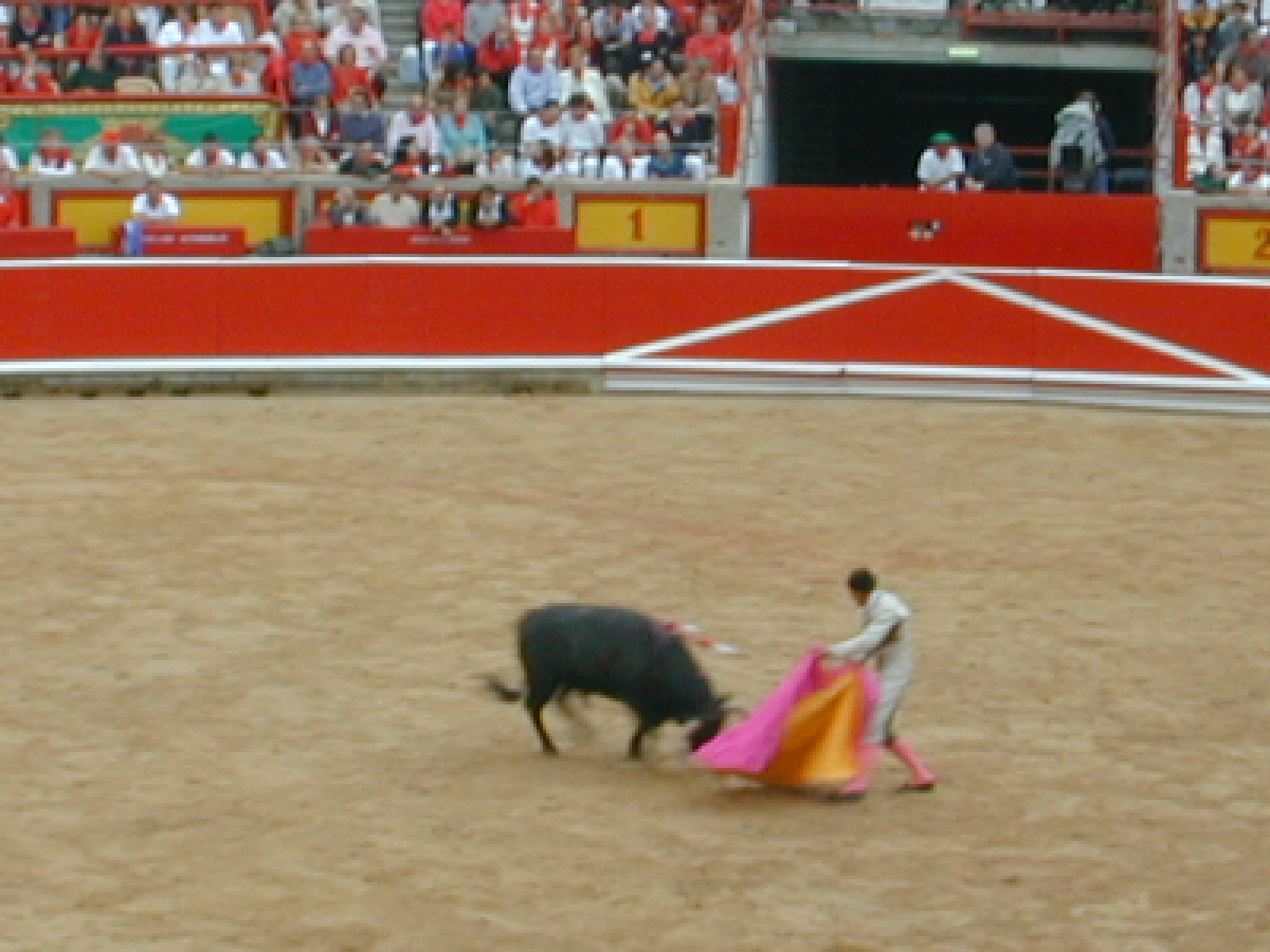 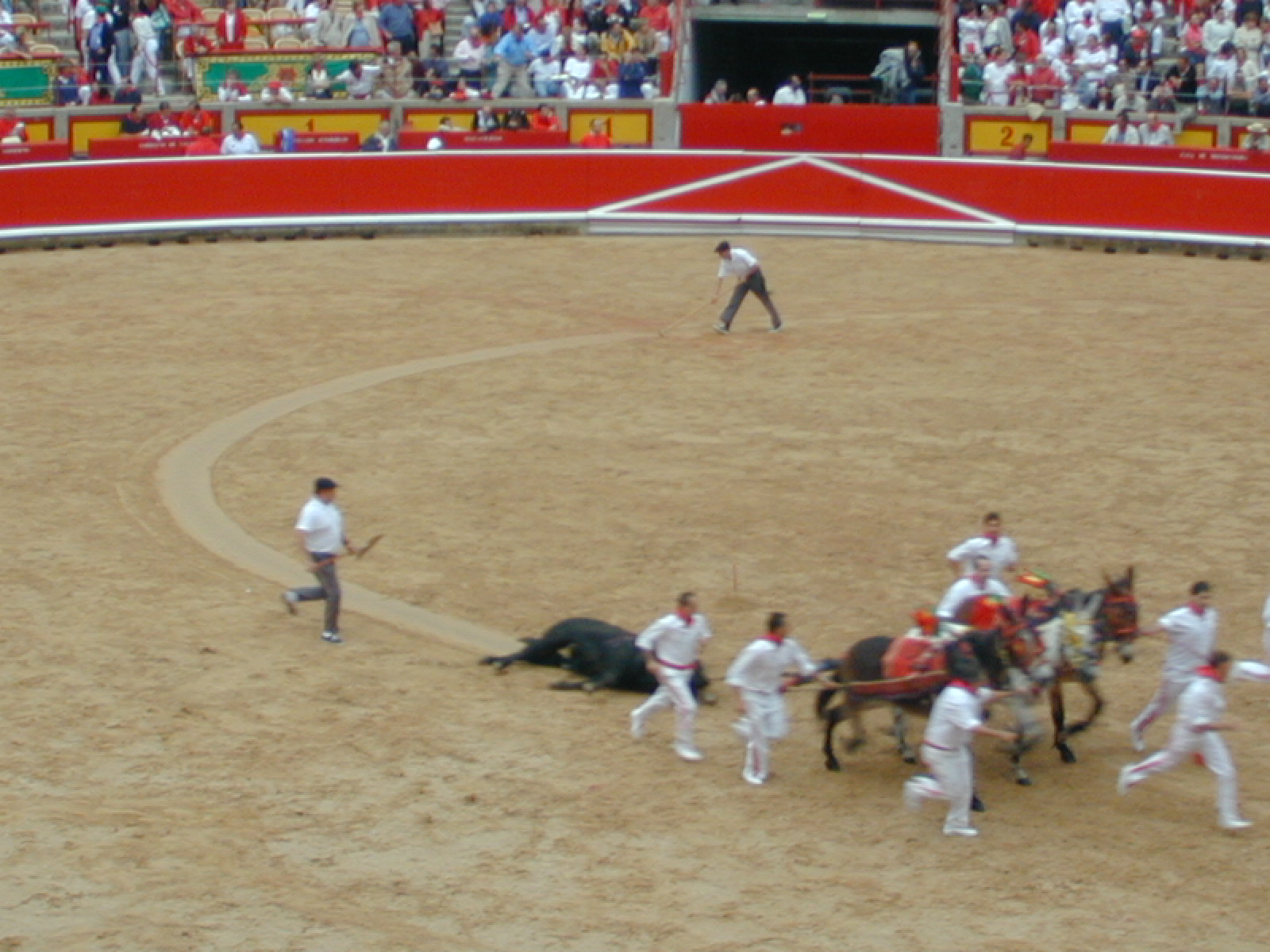 The next morning, my friends decided to back out of running. They were “scared” or something like that, as if bulls who’ve been penned up for a while get aggressive. I decided to still run. After packing myself into the human pen with 300 other people (estimated 94% Americans between the ages of 20-27), we heard a gun fire. That meant that the gates to our pen would open, and we could begin the 800 meter run, which ended in the bull fighting arena we’d been in the night before. About a minute later, after I’d barely started moving due to the crowded beginning to the run, we heard a second gun fire. This meant that the bulls, a short distance behind us, had been released into the streets.

I kept jogging down the road as if nothing was happening, because it felt like nothing was happening. Then, suddenly, the sound changed. It didn’t sound like people running. The eight 1,500 pound animals charging at us were shaking the street. I had about 100M left to run so I took off, easily breaking the world record for the 100M (wind aided). As I approached the arched entryway to the arena, a man tripped and fell. I went into Track & Field mode, and hurdled him with what I believed to be spectacular form, but from the side, was probably a bit less spectacular. This caused me to forget that when I entered the arena, I was supposed to run straight for the side…so I ran straight out into the middle. I looked behind me, and 3 feet away was the first bull, charging at me. I pivoted to the right. His nose caught my back foot. I fell, scraped up my knee in the bull bloodied gravel of the arena, then ran for the wall as the bull tried to slow his momentum and turn after me. I made it over the wall safely and muttered a “thank you” to the sky. 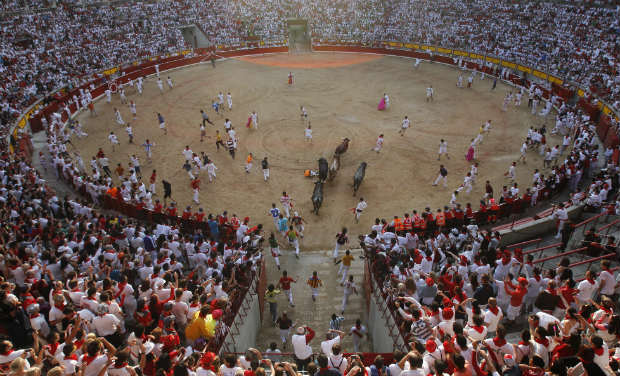 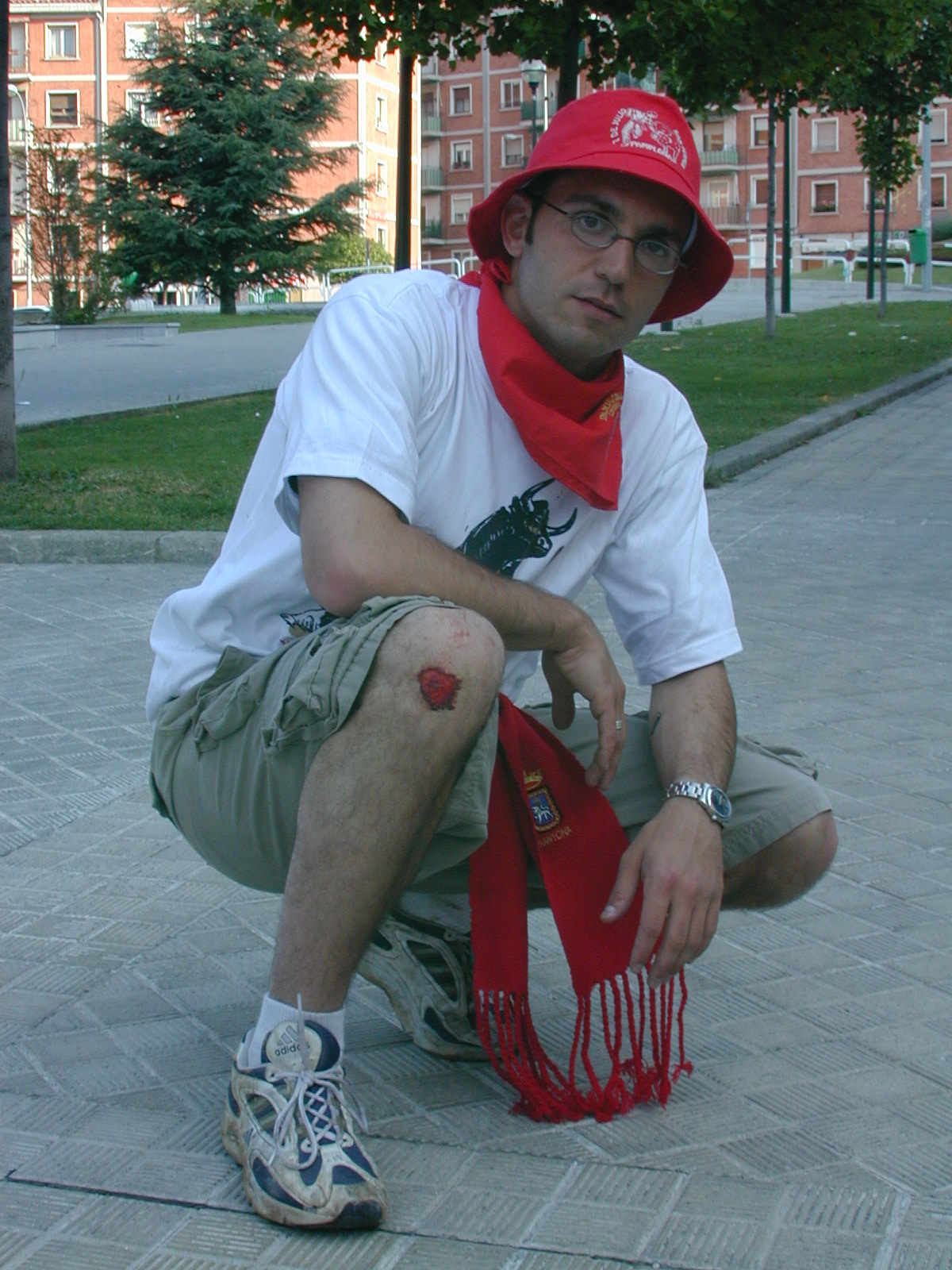 What I didn’t know after I’d made it, was that behind me, on the street, a 25 year old from NJ had been gored, almost to death, that day. My ex-girlfriend, who knew I was running, heard this. I, also a 25 year old from NJ, went on my way to the next stop on our trip, Nice, France. My ex-girlfriend emailed me over 100 times over the course of 2 days just to make sure I wasn’t dead. When I finally got to an Internet Cafe and responded, we both realized that “for good” should become “for better or for worse” instead, and she’s now my wife of 13 years.

At this point in the interview I stop the story and say:

“When I’m asked, what’s the most interesting thing that’s ever happened to you, that story is my reply.

I’m usually met with befuddled silence. But it doesn’t take long for the interviewee to get personal, share a story, and clearly pour out passion over a life experience. When they do, my last question is “now how will you use that, and stories like it, in your classroom?”

That’s when I learn the most about them.

And for all of you who have the pleasure of interviewing teacher candidates this spring, I hope you don’t experience this…